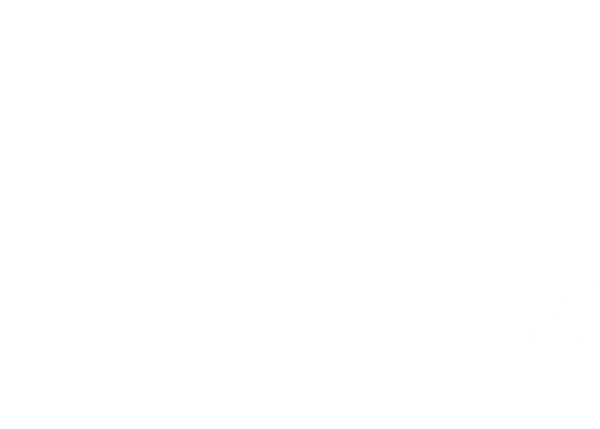 HAPPY SAD MAN is a charming and uplifting insight into the lives of five very different Australian men.

Following her smash hit I AM ELEVEN, Australian filmmaker Genevieve Bailey was inspired to find more diverse and positive portrayals of men exploring their emotional selves. We journey from Bondi Beach to the outback; we laugh and cry alongside a war photographer traversing global conflict zones, we visit a farmer and outreach worker from rural Victoria, a musical nomad and a sensitive dog-loving artist. Each portrait is an intimate and heartwarming look into vulnerability, friendship and compassion.

HAPPY SAD MAN gives unforgettable voice to the complex emotional landscapes we can all traverse. Touching, funny and tender, this must-see documentary is set to shine a light on and change the dialogue around masculinity and mental health today. Exploring hopes, anxieties, joy and darkness the raw vulnerability of these stories will inspire you to hold some of the men in your life that bit closer. 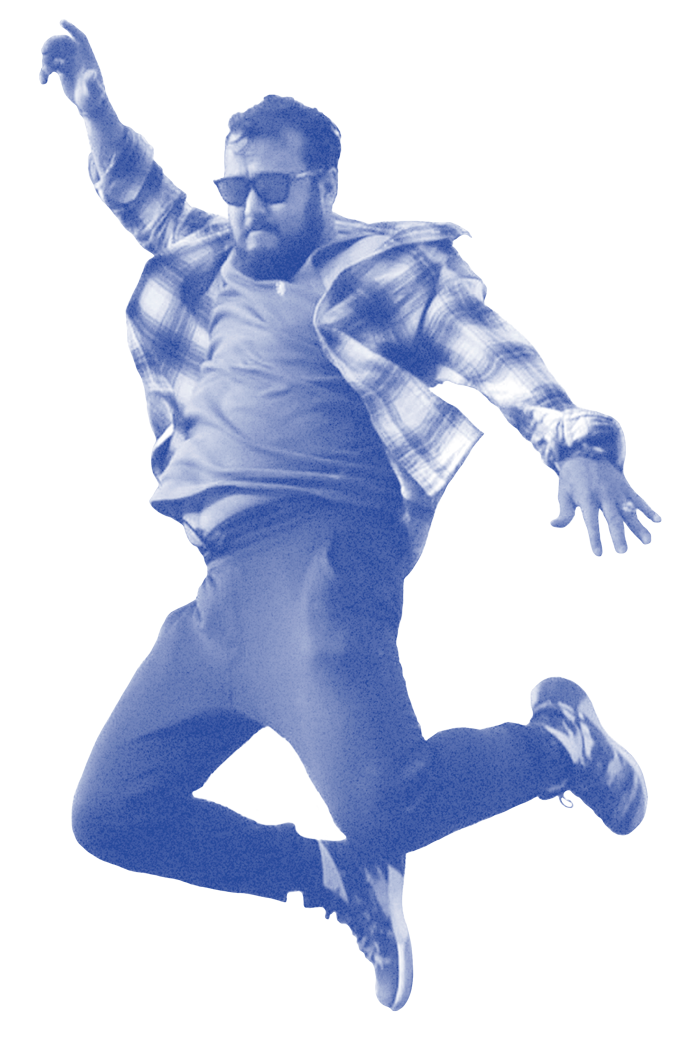 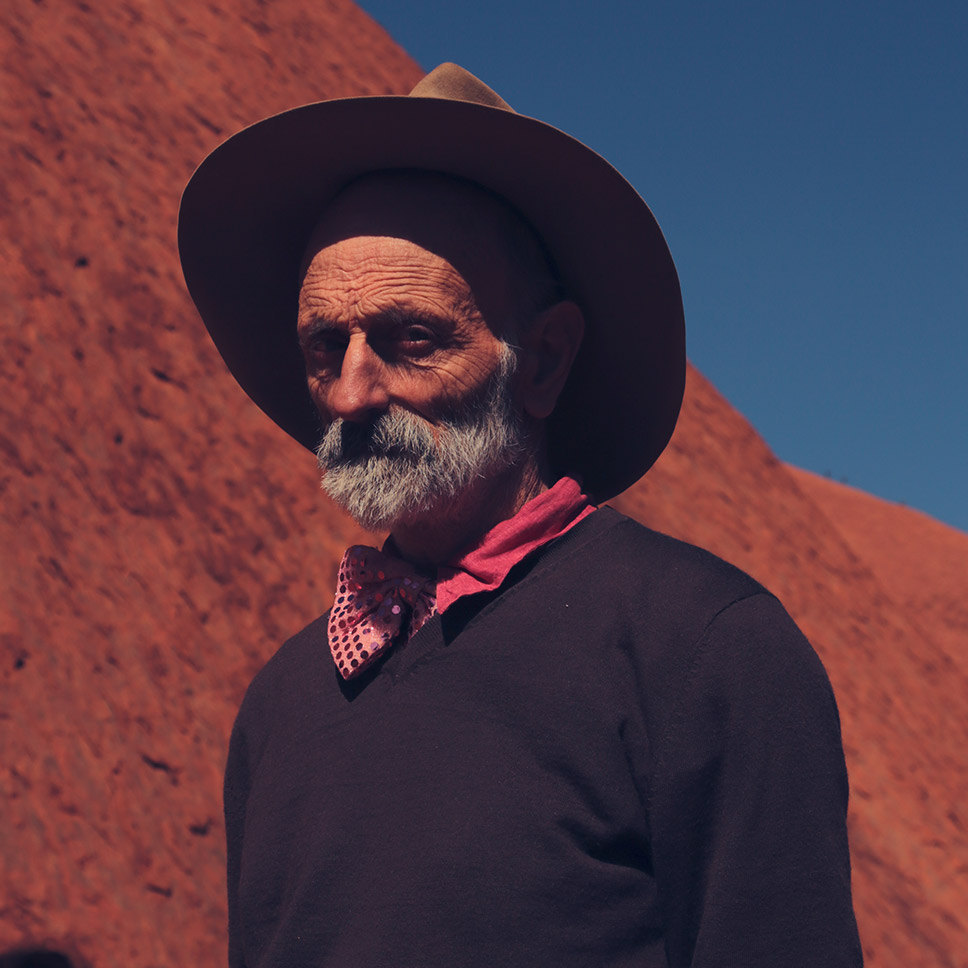 “12 years Melbourne Grammar School. Do you want my history of Melbourne Grammar? I mean photos of me as captain of the footy and cricket teams, and all that jazz? Uneducated. Flunked university. Old hippy… I am. I’m just me. Put that on the big screen. I’ve got a mental illness, and so have you.”

John is quick-witted, charming, challenging, a creative musician, bush carpenter, father and friend. But John wouldn’t approve of this reductive bio. He would want you to see the film and listen to his music to find out more.

He is the inspiration behind HAPPY SAD MAN. 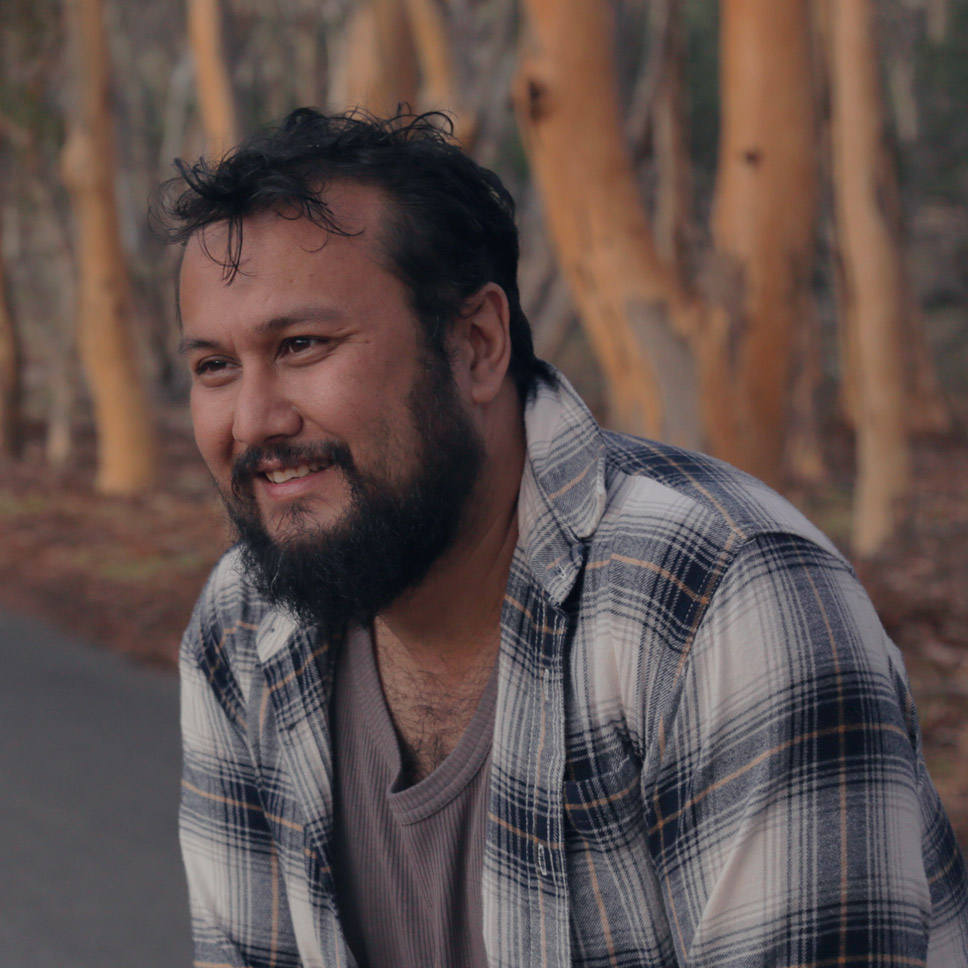 “I grew up on action films. Most of all my role models were bad, bad 80s, 90s action heroes – Arnold Schwarzenegger, Kurt Russell. Masculinity is just bred in by culture, by stories. In that men usually do the brave and courageous things. But women do amazing things too. I definitely see the world as good guys and bad guys, and I like to think of myself as a goody guy.”

Jake was born in Malaysia, raised in Melbourne where he worked as a cinematographer before leaving to pursue work in disaster and conflict zones as a war photographer, primarily working in Afghanistan and Syria.

His humanitarian mum is his hero. Jake has some of the best dance moves you’ll ever see. 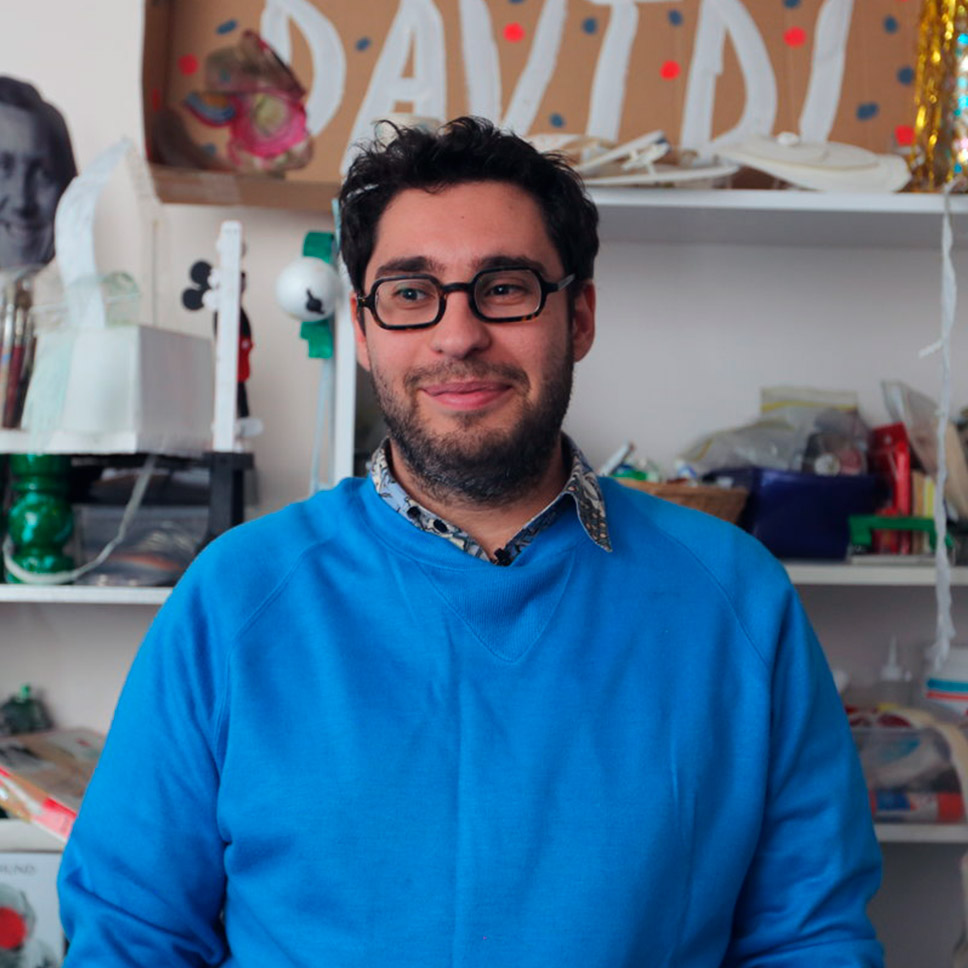 “I’m David Capra. I’m an artist. I have an interesting balance between being happy and sad. That’s where my art work has been really helpful. It just kind of automatically seems to be trying to pursue joy in some strange way.” 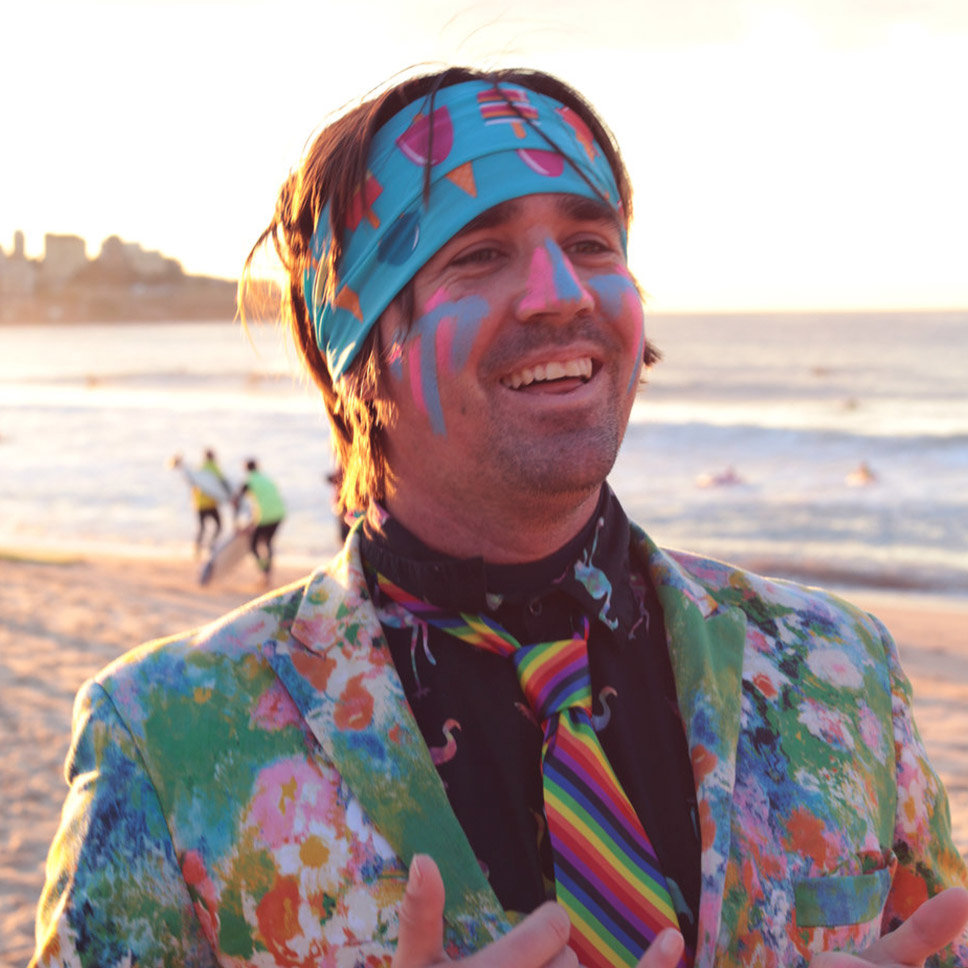 Grant was born in New Zealand but is now based in Bondi. Grant is a surfer with a passion for talking about mental health. It began when he was diagnosed with Bi-Polar. Grant founded ONE WAVE and FLURO FRIDAY which has now gone global. Last October, Prince Harry and Megan met with Grant and joined in on the action on Bondi Beach which made international news. 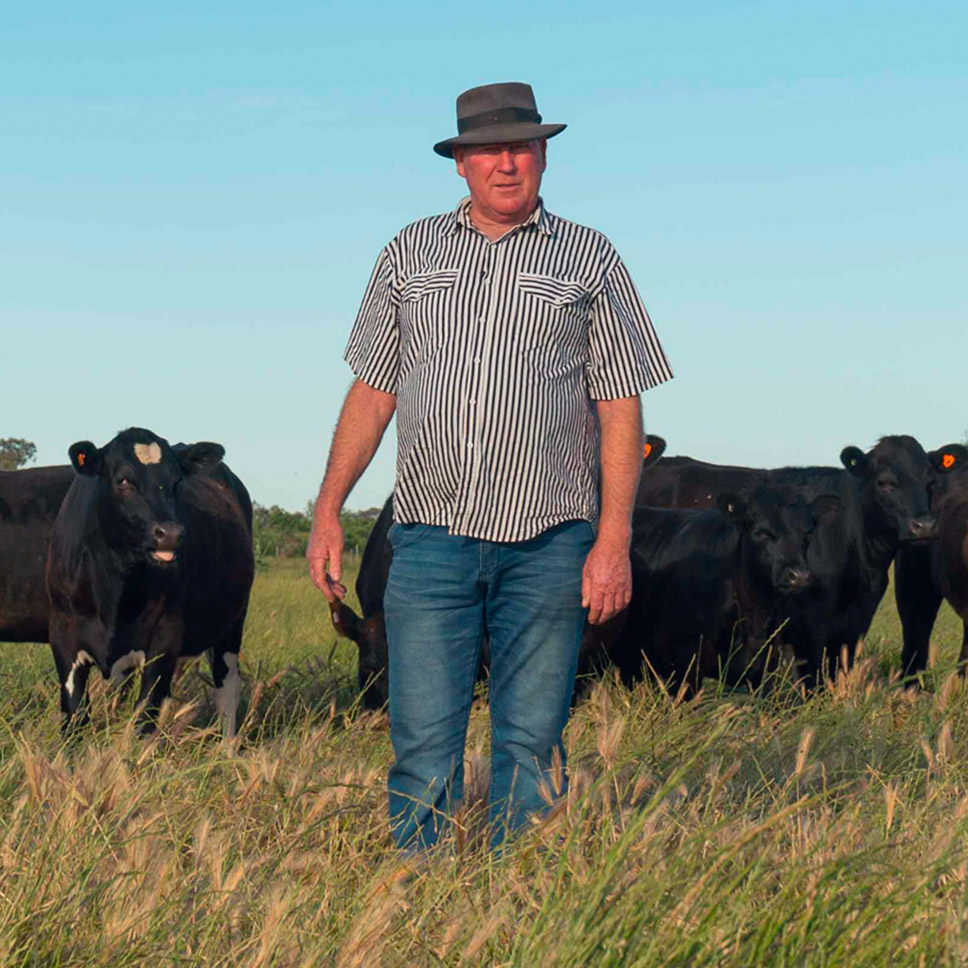 “What guys will do, farmers let’s say, they’ll make sure their tractor’s right. They’ll make sure the car’s right. They’ll make sure the plumbing’s right on the shed. They’ll do all that stuff but they don’t do anything for themselves. I’m employed as an outreach worker, mostly to the farming community. When I first started in this job 13 years ago, I thought, Well I’m not going to be sitting around in meetings talking to people about nothing. Professional people. I want to go out where the need is. Just chat. Have a few cuppas. Talk about, you know, what’s going on. Until you actually get what the deal is. To go to their place is really good because it’s confidential conversation. They get to trust you and it’s their environment.”

Ivan strives to help farming families affected by drought and all the challenges that living and working on the land can bring. He loves animals, his family and sharing great belly laughs. 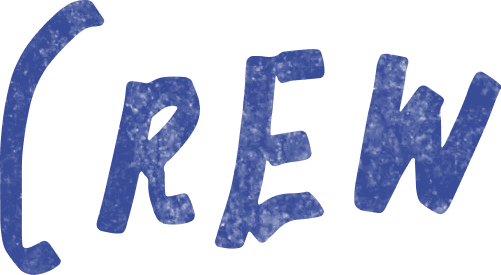 Born in Melbourne Australia, Genevieve Bailey’s films have screened in 50 countries winning over 30 awards to date. With a background in short drama, comedy and music videos, I AM ELEVEN (2011) her ambitious first feature documentary, was shot in 15 countries and in 12 languages.

It received critical acclaim and a theatrical release in Australia spanning over 8 months including a record 26 weeks at Cinema Nova in Melbourne. I AM ELEVEN was named New York Times Critic’s Pick when it opened US cinemas. The film became the highest grossing Australian documentary to be released theatrically in the US – playing extended seasons and reaching over 100 cities.

I AM ELEVEN won Best Documentary of the Year at the IF Awards in Sydney and awards in the US, France, Spain and Brazil.

Genevieve Bailey was named one of Australia’s ‘Top Film and TV of directors of 2012′ in the Encore and Mumbrella Annual. Melbourne Magazine named her one of “Melbourne’s most influential, inspirational, provocative and creative people.”

Genevieve is as passionate about filmmaking as she is about reaching audiences through innovative distribution, active engagement and meaningful outreach.

Her other recent directing credits include THE FUNNY ONES (ABC TV, 2017) and JUDGING THE GATWICK (Premiered St Kilda Film Festival 2019)

Nick Huggins is a Melbourne musician, composer and producer who loves to explore sounds, analogue or digital, accidental or intentional.

He has released solo work in a series of five albums since 2007 and production credits include Jen Cloher, Kid Sam, Skipping Girl Vinegar and Laura Imbruglia.

He composed the scores for feature length films I AM ELEVEN, Jackie Van Beek’s THE INLAND ROAD (with James Kenyon) and  HAPPY SAD MAN as well as sound design for WITHIN (premiered at NGV as a part of the ’Melbourne Now’ exhibition.) He also runs the micro label Little Lake Records, releasing quiet records to a mailing list.

Born in England, and raised on Bob Dylan, Cat Stevens and Van Morrison, Lisa Mitchell’s musical journey began at the tender age of 12 fronting a local band in her Australian hometown of Albury.

After a string of successful independently–released EPs, Lisa wrote and recorded her debut album Wonder at the tender age of 18. Wonder went on to achieve platinum sales status in Australia and Lisa embarked on a non-stop touring schedule including international tours with Mumford & Sons, her own theatre headlines and an inspired set at UK’s legendary Glastonbury festival performing alongside Neil Young, Bruce Springsteen and Nick Cave.

Annabelle’s screen credits include BLACK COMEDY, ROSEHAVEN, UPPER MIDDLE BOGAN, NOWHERE BOYS and LITTLE LUNCH, for which she received a 2015 AACTA nomination for Best Editing in Television. Her documentary credits include episodes of the ABC Arts series ANATOMY as well as CLASS ACT! for ABC’s Compass series. In 2015, she edited CHSING ASYLUM, which received widespread critical praise and won an AACTA for Best Feature Length Documentary. Annabelle works across a range of genres and has received Australian Screen Editors Guild nominations for her editing in comedy, documentary and short film.

Robert has won multiple screen awards and has screened his ﬁlms in over thirty major international ﬁlm festivals including the Berlin, Toronto and San Sebastian International Film Festivals.

Born and raised in Sweden, Henrik Nordstrom has a background in e-commerce, photography and music. Henrik has traveled the world and then some. He is passionate about sustainability and community and he is a keen supporter of causes that are good for this planet.

We are delighted that you can now stream the entire Happy Sad Man soundtrack on Spotify and Apple Music now.

The soundtrack is by the incredible Nick Huggins with special guest vocals from the wonderful Lisa Mitchell.

If you would like a CD of the soundtrack or John’s original music please email us today.

Find out more about our composer  Nick Huggins via www.nickhugginsmusic.com and Lisa Mitchell here www.lisamitchell.com.au 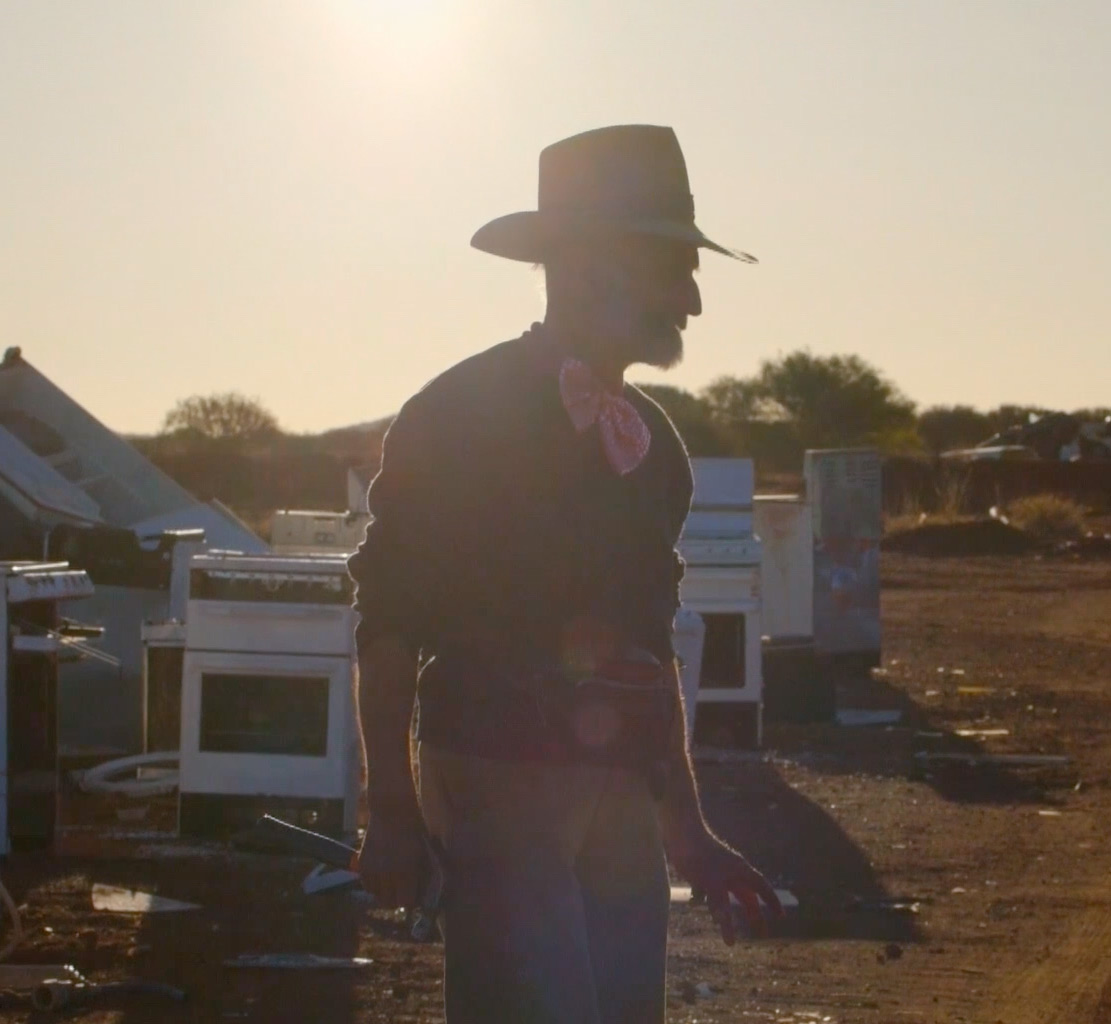 Happy Sad Man has been made with the generous support and financing of Good Pitch Australia, Shark Island Institute and Documentary Australia Foundation.

With special thanks to our wonderful partners 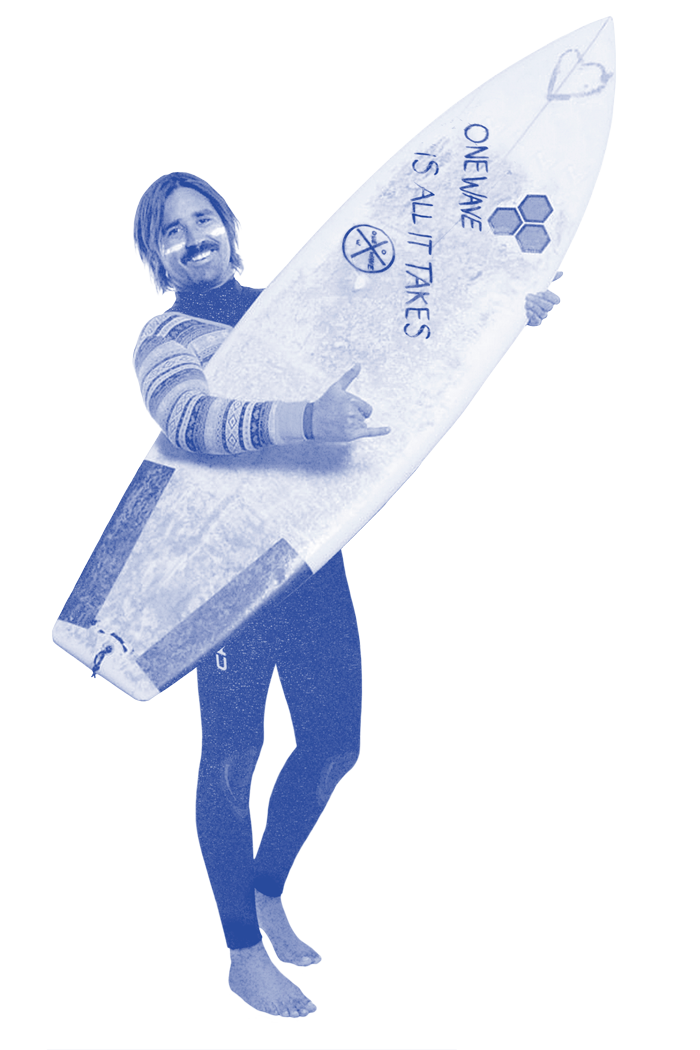